Nagasaki Airport, which opened in 1975, was built on reclaimed land around the island of Mishima on Omura Bay, in the center of Nagasaki Prefecture, making it the first airport in the world to be built on the ocean.

Mishima Island was a small island on Omura Bay, with an area of approximately 900,000 square meters and a circumference of 7 kilometres. It was home to 66 people in 13 households, who agreed to relocate so the airport could be built. Construction began in 1972, and took about three years to complete, at a cost of ¥18 billion. The work included the reclamation of approximately 1.54 million square metres of land and the construction of the 970-meter Mishima Ohashi Bridge to connect the airport to the mainland.

The new airport began operating on May 1, 1975, as a Type II Airport with a runway of 2,500 meters in length (60 meters wide). Jet aircraft flights to Tokyo and Osaka began at the same time, and the airport was renamed Nagasaki Airport. In September 1979, the first scheduled service to China (Shanghai) began, marking the airport's first step as an international airport. The runway has since been extended to 3,000 meters, and various extensions have been made to the domestic and international terminals. 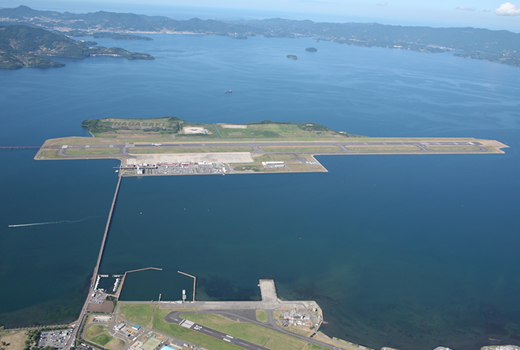